What is Happiness Anyway?

Have you ever had a dream so odd, but so realistic that when you wake up you think… “what in the world is going on in my life that my subconscious came up with that?”

Last night I had a dream that although I don’t remember all of the details, I remember that at some point in a totally illogical moment (meaning the scene before did not logically lead to the next), I was on a roller coaster.  It was quite realistic because I remember having the sensations of the steep inclines and ferocious drops.  In real life, I’m one of those people that is secretly terrified of roller coasters but force myself to go on them.  I am not afraid of the drops, I am more afraid of the fact that the people operating the rides look like they are too young to make ice cream shakes for a living, let alone be the person that verifies that my seat belt or lap bar is securely in place.  I also don’t like that since I wear glasses, I have to hold them in my hand and I’m not enough of a dork to sport a fanny pack.  No one should ever sport a fanny pack, ever.  Then I think of all the nuts and bolts, the age of the wood, the union workers from the steel plants, etc. and by the time I get to the front of the line I want to walk into the seat and right over to the other side towards the exit.  That’s never happened though, I have always forced myself to sit down as I step into the ride.  I’m not sure if it’s because I don’t want to look like a sissy or because I naturally force myself to face my fears whether the fear is justified or not.  I really have never taken the time to figure it out.  Here is another crazy fact from real life.  I always ride roller coasters with my eyes closed.  In the dream, my eyes were wide open.  In real life, I grip the handles or seat belt so hard that I’m always shocked my eye glasses are still in one piece at the end.  In the dream, I don’t remember doing that, in the dream I was just calm and silent throughout the whole ride but somewhat cognizant that it was a dream and I didn’t understand why I was suddenly on a roller coaster.  Towards the end of the dream roller coaster ride, the cars on the ride started to go backwards instead of fowards and I felt as if there was an unforeseen drop in our future, but the drop never came and the cars just backed into the platform where you exit.  The ride was over.  I was extremely relieved that I didn’t have to go through a dream backwards ride with a huge terrifying drop on a fake coaster maintained by fake teenagers and fake careless maintenance men.  I don’t remember much after getting off the ride other than the fact that there was a long, white hallway with lots of doors.  I wasn’t alone on this fantasy adventure but I don’t remember who was with me distinctly.  I woke up at some point not long after the ride ended.  One of the dogs was scratching at our bedroom door (at 5am) wanting to jump in bed with us.  Apparently, canines do not understand the concept of Daylight Savings and turning the clock back an hour.

I’m no “dreamologist” (if that word exists and according to WordPress spell check, it does not!) but I know that for the past few years our life has had many ups and downs and they seem to be happening more often and in more dramatic bursts.  Like we are in labor and the contractions are getting closer and closer but I have no idea what we are about to give birth to?  I feel like it is probably some sort of big change in our life.  A job, a business, where we live.  I’m not sure, but I have this feeling that something big needs to change in our life so we can get off the roller coaster. 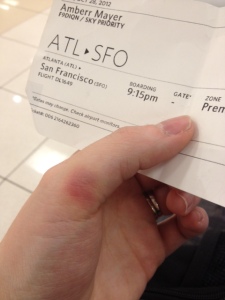 A few weeks ago when I was in an airport (I don’t even remember which one) I had a decently long layover so I went to a bookstore and grabbed a book.  I picked up The Happiness Project by Gretchen Rubin.  This is not my typical preference for reading material.  My favorite genre includes autobiographies, biographies and the history of successful companies.  In addition, I like books like The Tipping Point by Malcolm Gladwell or The Power of Habit by Charles Duhigg.  I am embarrassed to say that I don’t even know what genre those books fall in but I personally wouldn’t consider it “self help”.  I considered Googling what the genre is for those types of books but then decided that would be cheating.  I find most “self help” books utterly annoying to read.  I got through Stephen Covey’s “The 7 Habits of Highly Successful People” but only barely.  Most “self help” books are written by people who’s main accomplishment in life or claim to fame is starting “self help” programs or “success conferences” or of course, “writing a self help book”.  I prefer to hear from people who were actually successful at something more relevant that I could actually learn from because the first hand stories usually also include all of the failures that led them to the success.  (as a side note, WordPress spell check also thinks that Googling is not a word.)  I also don’t like those tests that Self Help books recommend that you take, that tell you your parachute color or your four letter personality category.  I don’t like to be put into a “bucket” or to think that a 100 question quiz can sum up the whole of me in four letters or a color.  The only “categorization” I tend to openly communicate to others is that my zodiac sign is Scorpio.   I think I tell that to people because it is a way to quickly summarize in one word how they will come to know my personality… which is somewhat of a warning.

Anyway, I’m more than half way through The Happiness Project which means a couple things.  If I pick up a book and I’m really absorbed in it, then I can finish a very long book in one day.  Which doesn’t necessarily mean that I don’t like THP, because I think I do like it.  I’m just having to re-read parts over and over because I spend so much time thinking about Gretchen’s experiences and if they relate to my own life in some way or another.  Some do, some don’t.  I also start to day dream about what should be in my own “happiness project” or if I need one at all.

One of the things that rings true to me and I think I’d like to try is that Gretchen tries to stop complaining about people and things she hates in the hope that she will then dislike the person or thing less.  Since reading that, I catch myself when I’m about to complain about something or someone and I’ve noticed that it is really emotionally draining and tends to make something that is probably not a big deal, “feel” bigger than it is because saying it again out loud seems to somehow compound the problem or make it grow.

I also read this blog by a really smart person that I work with, who is one of those leaders in a company that everyone hates to disappoint.  He makes a really great observation in this blog that most people complain on Social Media channels, especially about their job.  Again, in all fairness to not cheat.  I would be in that category of “social media job complainers” but I’ve been too afraid that our corporate social media big brother division would see it and either ask me to remove it or schedule me for a company culture rehab session.  I also have way too many of my own staff and colleagues as “friends” and “followers” and I don’t want them to know when I’m at the top of the roller coaster, nor when I’m on the downhill slope.

Plus, being unhappy is contagious.  I have been told that to be successful in a corporate environment you have to really check your emotions.  This is something that I think I am definitely better at but I will likely never be able to fully achieve. Besides, when I look at the people who make it to the very top – they are for the most part – some of the most emotional people I’ve ever met in my life.

For those of you who have not gotten lost in this blog post thus far or have trusted me to keep reading long enough to get to this paragraph – just know, I do have a point.

The point is that we are all in control of our choices, we just tend to freeze up when the consequences of a choice carry a certain level of “unknown”.  I also think that our society sees “making a change” as negative unless the change includes making more money or having more opportunity.  Isn’t this because we are indoctrinated as a child that more money brings more happiness?  For the most part, I’ve never seen that actually occur.  I think that the only time people’s happiness is weighted by the amount of money they have is whether or not they have reached the threshold of “enough”.  Not having “enough” can cause unhappiness, and at the point you’ve reach “enough” – anything more and I think the amount of money you make or have becomes proportionately less important.

I also know that I hate “quitting” anything or giving up on a challenge.  This is probably why I don’t step right through the seat on the ride and just head for the exit.

So here are a few of the things I think I need to do differently to be happier and avoid weird fake roller coaster dreams in the future:

2.  Figure out what “enough” is when it comes to a job, money, friends and sleep.

3.  Figure out what “unknowns” I can live with and which ones I can’t and clearly define them so changes don’t seem so daunting

4.  Be fine with “quitting”.  I just turned 33 and that seems like a good age to completely let go of what anyone else thinks of my choices.

I’m not sure that I am going down the path of my own “Happiness Project” yet or just taking some recent experiences and picking a few things to focus on.  I just know that in this ride we call life, I have no intentions of reaching the end facing backwards.